Previous astrochemical models could not explain the observed abundances of many complex organic molecules (COMs). Traditionally, gas-phase ion-molecule chemistry was employed to explain the observed chemical complexity in hot core regions. However, many times these gas-phase mechanisms are found to be inefficient.

Models have now turned to formation pathways in icy dust grain mantles to explain chemical abundances of  hot cores. Absorption spectroscopy on interstellar ices has shown the presence of species like water, methanol, formaldehyde, and formic acid. It is possible that complex organic molecules are formed in these ices and thermally desorbed during the formation of a new star. Such chemistry requires a gradual warm-up of the gas and dust around the new star, rather than the previously-assumed jump model:

Radical-radical reactions involving the simple products of ice photolysis had been considered in the past, but were not included in astrochemical models of hot cores until 2008. In a collaboration with Professor Eric Herbst’s research group at The Ohio State University (now at Univ. of Virgina), we have shown that icy grain reactions can produce most of the organic molecules observed in hot cores.

In the plot above, the final fractional abundances for a variety of COMs are shown. The standard OSU gas/grain network is that which was used in Garrod et al. (2008) and the modified network containing an additional gas-phase formation route for methyl formate by Laas et al. (2011). In the plot below, the evolving warm-up phase of a hot core is reflected in the changing relative chemical abundances. 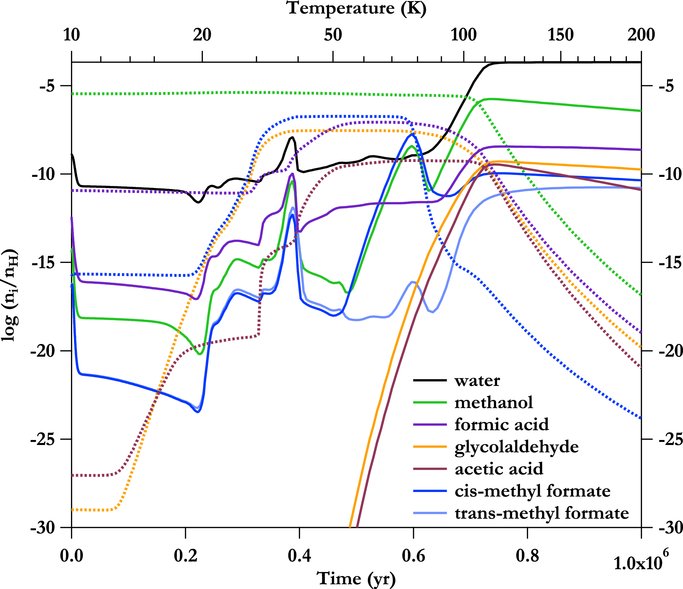