Once we characterize molecules with our laboratory THz spectroscopy, our group conducts observational searches for these species in astronomical sources. The ultimate goal is to elucidate prebioitc chemical formation and destruction pathways in interstellar environments. While there are many hot cores, previous work has focused on the Orion-KL and Sgr B2 regions. Our group is now beginning to do spectral line surveys of other hot core regions with varying physical properties so that we can study the effects of these physical conditions on hot core chemistry.

Most of our work uses ground-based radio telescopes, such as the Caltech Submillimeter Observatory (CSO) on Mauna Kea in Hawaii, the Green Bank Telescope (GBT) in West Virginia, and the Combined Array for Research in Milimeter Astronomy (CARMA) in northern California. Upper atmosphere or space-based observatories such as the SOFIA observatory and the Herschel Space Observatory allow for highly sensitive searches to be conducted without interference form the Earth’s atmosphere. In addition, high spatial resolution and sensitivity is now possible with the Atacama Large Millimeter Array (ALMA), located in Santiago, Chile.

Dr. Widicus Weaver’s most recent observational work has been in collaboration with the Caltech Submillimeter Astrophysics Group to use prototype wideband receivers to conduct broadband, high-sensitivity spectral line surveys of star-forming regions. 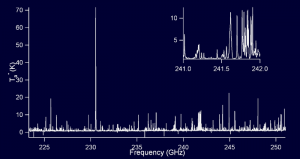 These surveys surpass the sensitivity of previously-published observations by an order of magnitude, and have reached the spectral line confusion limit in the Orion and Sgr hot cores. The results of these surveys provide spectral line information for comparison to future laboratory spectra. Our understanding of astrochemical mechanisms are refined with the information gained from these observations. The physical properties of the identified molecules can then be entered into astrochemical models, placing constraints on the possible formation pathways of biologically-relevant species.