Methanol photolysis on interstellar grain surfaces is a central aspect of prebiotic astrochemistry. The organic radicals that undergo reactions during the warm-up phase of star-formation arise from the photolysis of methanol on grain surfaces, and it is from these radicals that most prebiotic organic molecules are thought to form [1, 2]. The products of methanol dissociation are extensive, as is shown below in an energy level diagram adapted from ab initio calculations [3, 4]. Remarkably, the branching ratios for methanol photolysis have not yet been adequately measured in either the condensed or the gas phase. The branching ratios assumed for astrochemical modeling studies are essentially educated guesses based on previous laboratory experiments that were ill-equipped to quantitatively determine the relevant values. Laboratory measurement of these branching ratios under a variety of astrophysical conditions is key to understanding any organic chemistry in interstellar environments, particularly prebiotic chemistry. 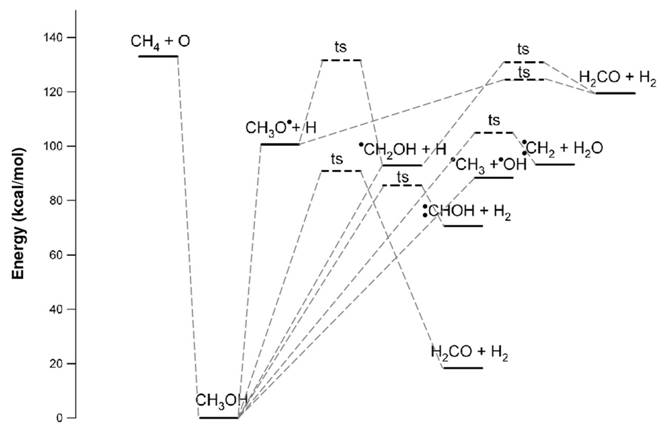 Quantitative measurement of methanol photolysis branching ratios relies on high-sensitivity THz spectroscopy which can be used to monitor the  dissociation products by probing their pure rotational transitions. Each of the dissociation products have strong rotational transitions across the submillimeter and THz spectral ranges, and direct-absorption techniques provide the quantitative information needed to accurately determine the photolysis branching ratios. Our group is conducting initial measurements using the direct-absorption setup shown below. Here, an excimer laser is used to photolyze methanol as it is supersonically expanded into a vacuum chamber. A direct-absorption submillimeter spectrometer is then used to monitor the methanol signal depletion and/or the signal increase from the pure rotational signatures of the product channels. While this direct absorption approach works well for monitoring the major product channels, ultimately the higher sensitivity of THz-CRDS may be needed to directly measure the minor product channels. 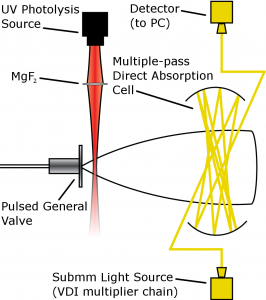 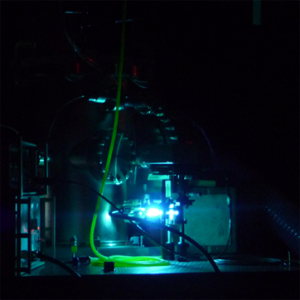