III. As a new star forms, the dust and gas in the cloud is gradually warmed. The simple radicals become mobile on the grain surface and can react to form more complex organic molecules such as sugars and amino acids.

IV. Once the temperature in the cloud reaches ~100 K, most of the molecules are released into the gas phase via thermal desorption from the grain surface. 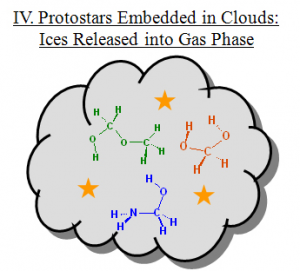 V. Gas-phase ion-molecule reactions can lead to even more chemical complexity. Reactions leading to amino acids are possible during this phase.

VI. The interstellar material is eventually incorporated into “parent bodies,” which include meteorites, comets, and planets. Aqueous-phase chemistry can occur in these objects, and so even more complex biological molecules can form. Impact of meteorites and comets is thought to be an important delivery mechanism of water and organic material to the early Earth, seeding the formation of life [3,4]. 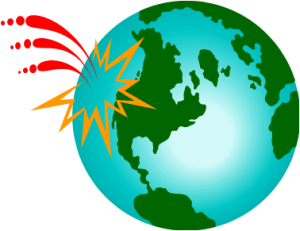